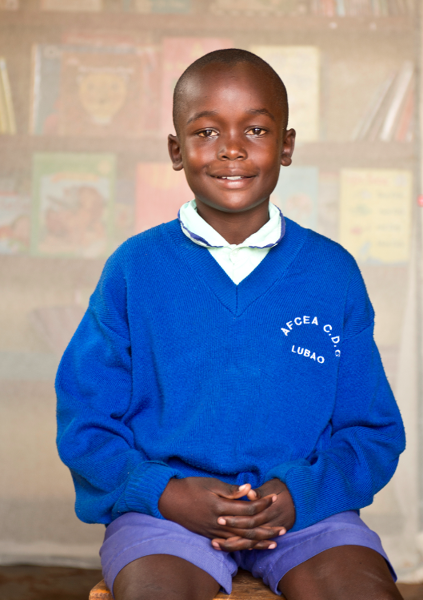 Hilary Maloi is currently sponsored by an anonymous giver.

Hilary is 10 years old and the twin brother to Sislia. Yes we said twin brother it was a total surprise to us when we returned to Kitale for our next round of interviews and photos in October, to find that Sislia and her two sisters had a brother. Back in April of 2013 not one of them mentioned a brother. It wasn't until after the three girls moved into the new orphanage in September that they finally mentioned Hilary. "Could he come live with us here too" they asked. Our partners did some inquiring in the slum to see how he was. Word came back that life with their grandma had become too hard and he had been moved in with his aunt who was having trouble providing for him along with her children. No one had told Hilary where his sisters had been taken, he did not know they were in a better place. They also found that his health was failing. Out of concern for his well-being Hellen made the decision to take Hilary into the orphanage without a sponsor.

On our first day of interviews he was brought to Seed's Academy for the first time. Just as we began to talk with him, his sisters who were on the playground found out that Hilary was there and we soon started to hear giggles from just outside the partially opened door. Hilary's attention was totally diverted he was so glad to see his sisters, we stopped the interview, had a short family reunion and then continued. As we asked questions he was very thoughtful about his answers. He's a fourth grader who loves school and science is his favorite subject. He wants to live in Nairobi so he can be a pilot and fly planes to America one day.

He came home to the orphanage with us that very night and all four siblings were thrilled to be together.

Our heart's desire is to connect Hilary with a sponsor that will help him become all that he is destined to be. To develop a relationship with him, showing him there are others out there that believe in him, and his sisters.